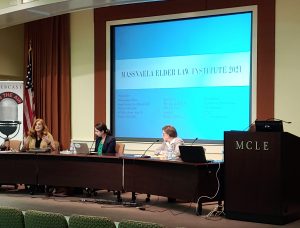 Attorney Fine was a panelist at the annual Elder Law Institute in Boston, sponsored by the Massachusetts Chapter of the National Academy of Elder Law Attorneys, on September 24, 2021. From left, Patricia Keane Martin, Esq. of Seegel Lipschutz Lo & Martin, Lisa M. Neeley, Esq., of Mirick O’Connell, and Attorney Fine gave a rundown on recent cases.

The Boston Bar Association recently asked Attorney Meredith A. Fine to write an article about the landmark Kendall case, in which the Supreme Judicial Court ruled that MassHealth claims against estates can only be made within three years of the beneficiary’s date of death. 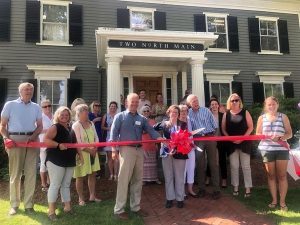 The Law Office of Meredith A. Fine recently opened a second office, at 2 North Main Street, Ipswich, in the historic Appleton building. The Greater Cape Ann Chamber of Commerce hosted a ribbon-cutting that was attended by family, friends and clients.

Justice Scott L. Kafker, writing for the Court, explained that the Massachusetts Probate Code created “an ultimate time limit” of three years for all creditor claims on estate and did not make an exception for MassHealth. The Court noted that, as a creditor, MassHealth has the same right as any creditor to open an estate on its own motion. The Court also noted that MassHealth already has more time to file its claims than other creditors,

“The three-year ultimate time limit is a critical provision ensuring the orderly settlement and liquidation of estates in a relatively expeditious manner. We conclude that if the Legislature intended to create an exception for MassHealth to this ultimate time limit, it would have done so expressly…” wrote Justice Kafker.

The case was the first test of the statute of limitations on MassHealth claims under the Probate Code that was passed in 2012.

“The statute in question was extremely clear,” said Attorney Fine. “At some point, estates have to close. The Legislature chose three years and I’m grateful, on behalf of Ms. Kendall’s heirs, that the Court did not disturb the Legislature’s judgment.”

The question before the Court was: Does MassHealth have unlimited time to file a claim for payment on an estate? Ms. Fine argued that the Uniform Probate Code has a clear statute of limitations and the Legislature did not make an exception for MassHealth.

Ms. Fine represented the Estate of Jacqueline Ann Kendall, Docket No. SJC-12881. A decision is expected in early 2021. The argument can be found here: https://boston.suffolk.edu/sjc/archive.php